(September 20, 2011)–Two-time NASCAR Sprint Cup Series champion Tony Stewart evokes several images–owner of Tony Stewart Racing, co-owner of Stewart-Haas Racing, a highly competitive driver, and a tireless advocate of auto racing in its many forms. And,increasingly, Tony is also well-known as a dedicated philanthropist. Like his racing style, Tony Stewart pushes the limits to help others through his Foundation.

The Tony Stewart Foundation just announced the winners for its “Tony’s Grant Accelerator” competition. Louisville Weimaraner Rescue, Inc. has been selected as 1 of 40 charities from throughout the United States to be known as an Accelerator Charity and receive a monetary grant. More than 300 nominations were reviewed by the foundation and 72 organizations were invited to submit the full grant application.

“We created this competition to uncover terrific charities that are serving children and animals in innovative ways,” remarked Stewart.“ The result is a collection of charities–large and small–with a common denominator of having a strong volunteer network and a dedicated staff to deliver programs.”
Louisville Weimaraner Rescue, Inc. was awarded $5,000 in grant monies to be used for boarding homeless rescued Weimaraners while they await an open foster home. “We have been overwhelmed with the number of Weimaraners needing to come into rescue and the grant monies will now allow us to help even more,” said Rescue President, Denise King.
Louisville Weimaraner Rescue, Inc. was founded in 1997 and serves the Indiana, Kentucky, Ohio and West Virginia areas. To learn more about the Rescue, please visit our website at www.louisvilleweimrescue.com.

Since 2004, the Tony Stewart Foundation has awarded more than $5 million in grants to organizations serving children, animals and drivers. Complete information about the foundation plus photos & stories of the 40 Grant Accelerator  Charities are available at www.TonyStewartFoundation.org
TSF grant monies will allow Louisville Weimaraner Rescue to place homeless Weimaraners in boarding kennels while they await an open foster home

When you shop  here AmazonSmile will donate a portion of your eligible purchases to Louisville Weimaraner Rescue Inc at no cost to you!

Are You Weim Ready?

NOTE: After clicking the link above, please read through each page of the quiz as the purple bone link "Start Quiz" is not working on their website. 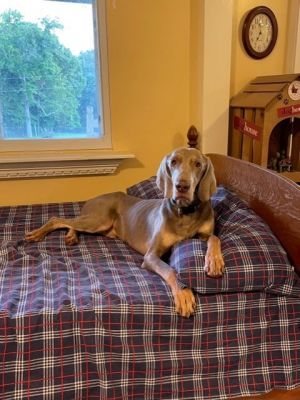 Hi everyone! My name is Dexter. I am approximately 1–2 years old. I haven’t lived the best life before coming... View full description »